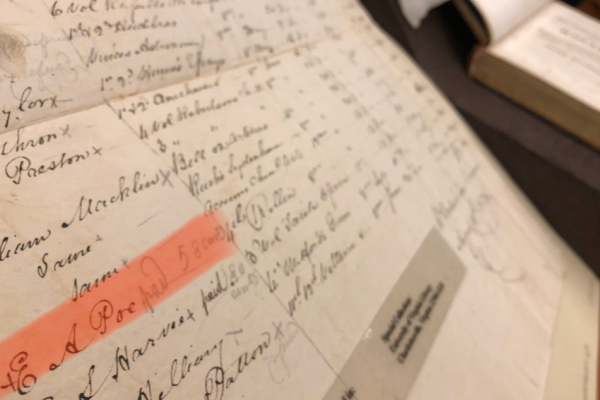 Rotunda Library Online (RLO, ‘arlo’) is a bibliographical database designed to include short-title entries for every book (3,150 titles in approximately 8,100 volumes) shelved in the University of Virginia's first library. With the goal of being the standard bibliography and short-title catalog (RLO-STC) of the University's Rotunda Library, RLO allows users to enter the Rotunda's world through its earliest descriptions, catalogs, and lists.

The RLO database is written in PHP and MySQL and currently supports keyword searching and single-facet browsing. The database is supplemented by an evolving suite of digital appendices that reconstruct the early Rotunda Library in an immersive and interactive web environment (see 'Appendices'). For example, our Featured Books page offers investigative and expository essays on individual RLO titles and points of provenance. These essays, concise yet nuanced and always illustrated, form an evolving showcase of our provenance, archival, and bibliographical research. As of December 2018, metadata refinement and site development are ongoing. Stay tuned.

One of RLO's principal goals is to identify original Rotunda Library books that survive at the University of Virginia. While scholars have long assumed that the Rotunda Library collection was destroyed in an 1895 fire, our research shows that a substantial portion of the Rotunda's books survive in the University of Virginia's Albert and Shirley Small Special Collections Library today. As seen in the RLO-STC, green icons mark original Rotunda books that survive; flame icons mark books that were presumably lost in the 1895 fire and do not survive; and

But how does RLO identify original Rotunda Library books? The process is painstaking, yet straightforward: over countless hours in the University of Virginia's Special Collections Library, RLO staff have sought out shelf mark and other distinctive provenance evidence (bindings, book stamps, book plates, etc.) that can be used to prove an individual book's Rotunda Library, and ultimately Jeffersonian origin. By collating this evidence with early booklists and catalogs, we have successfully identified over 1,300 original Rotunda Library books that survive. For an overview of this provenance evidence, see our blog-post, "Identifying Early Shelf-Marks from the Rotunda Library." Occasionally, this evidence does not survive—books are rebound, and title pages and spines that once bore shelf marks or stamps are lost. In this case, copies of books listed in early Rotunda catalogs extant in Special Collections are designated 'potential survivors'—in other words, these books may be original Rotunda Library copies, but lacking physical provenance evidence, this tentative designation cannot be proved. These potential survivors are marked with a grey diamond icon in the RLO-STC.

RLO is compiled, designed, and edited by Neal D. Curtis, Samuel V. Lemley, & Madeline Zehnder, PhD students in English at the University of Virginia. Early development of RLO was generously funded by the William R. Kenan Endowment Fund of the Academical Village and the Buckner W. Clay Endowment for the Humanities at the Institute of the Humanities & Global Cultures at the University of Virginia (IHGC).

To say that one is 'reconstructing' a library or a collection (digitally or otherwise) is to use a metaphor signaling participation in a genre of scholarly research; it is not unique phrasing, nor does it describe a unique methodology or approach. Countless researchers of historical collections and libraries have used this same metaphor to describe their projects, and one scholar’s reconstruction does not preclude subsequent attempts at reconstruction in different forms or with different emphases. It is this very condition of variability that guarantees humanistic study a dynamic and open future. We offer the following sampling of admirable 'reconstruction' projects to illustrate our point: The effort to catalog and reassemble books listed in the 1828 catalog by John Cook Wyllie, Louise Savage, and University of Virginia librarians in the 1940s and 50s; E.S. Campbell's reconstruction of the Rotunda's collection of books on art and architecture (1927-1950); E. Millicent Sowerby's Catalogue of the Library of Thomas Jefferson (1952-59); the ongoing Library of Congress effort to reconstruct Thomas Jefferson's Library (1999-); the Thomas Jefferson's Libraries project at the International Center for Jefferson Studies-Monticello (2004-); the Viseyes (UVa) reconstruction and data analysis of the University of Virginia's first library (2010); The Wolf Law Library's 'Wythepedia' and Wythe Library project at the College of William and Mary (2005-); and the 1828 Catalogue First Law Library Project, which reconstructs and studies the first collection of law books at the University of Virginia (2014-). RLO acknowledges these antecedent efforts while employing a different tack and different evidence.