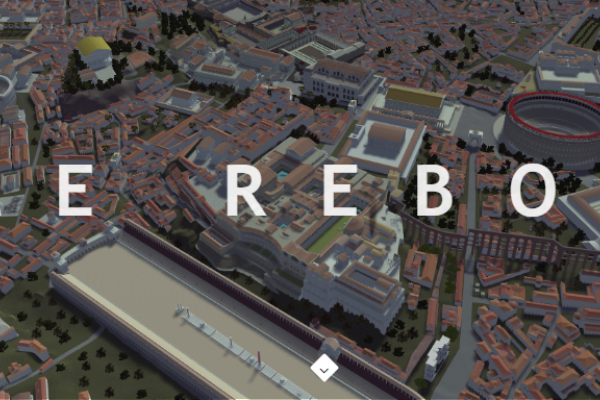 Did you ever wish you could travel back in time to see ancient Rome at the peak of its glory? Now you can thanks to Rome Reborn®, a series of products for personal computers and VR headsets that make it possible to visit the now-vanished ancient city. Computer reconstructions of the buildings and monuments explained to you by leading experts bring the city to life. Rome Reborn® is something new: think of it as the place where virtual tourism meets virtual time travel. Get your feet wet by clicking here to download a free trial version of our application presenting the Roman Forum. It runs on PCs (Mac, Windows 10) and VR headsets (Oculus Rift, HTC Vive).

Rome Reborn® is aimed at students and the general public. You will find it useful if you are studying ancient Rome in a history class, if you are preparing to visit The Eternal City, or if have already done so and want to deepen your understanding of the sites and monuments you saw. In terms of age, tests of Rome Reborn® products show that people from 6 to 96 find Rome Reborn® engaging.

Rome Reborn®  is a series of apps and videos that present individual tours of the city, including, for example, the Roman Forum, the Colosseum, the imperial fora, the imperial palace, the Pantheon, and the entire city seen from the air. Think of each app or video as a chapter in a guidebook about ancient Rome. You can gauge how much you have learned by registering on our website and taking our quizzes that will give you your expert rating. When you do well on a quiz, you will earn awards which you can share with your friends on social media.

Rome Reborn®  is an international initiative launched in the mid-1990s by the UCLA Cultural Virtual Reality Laboratory. The goal was the creation of 3D digital models illustrating the urban development of ancient Rome from the first settlement in the Bronze Age (ca. 1500 B.C.) to the depopulation of the city in the early Middle Ages (ca. A.D. 550). With the advice of an international scientific advisory committee, the leaders of the project decided that A.D. 320 was the best moment in time to begin the work of modeling. At that time, Rome had reached the peak of its population, and major Christian churches were just beginning to be built. After this date, the capital of the empire left Rome for Constantinople and so few new civic buildings were built. Much of what survives of the ancient city dates to the period around A.D. 320, making reconstruction less speculative than it must unavoidably be for earlier phases.